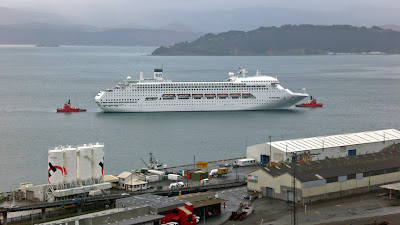 Wellington has a number of visits each year from cruise liners ... maninly for the passengers to see the Capital and then go across Cook Strait to the Marlborough Sounds ... a very beautifil spot at the top of the South Island.

This photo was taken yesterday on a grey wet morning on the way to work ... it wasn't till I looked at the photo on the screen that I noticed the sympathetic spots of red across the monochromatic view, that matched the three tug boats ... the latter is out of sight behind the cruise ship ... the three little red tugs are called Kupe; Toia and Ngahue (THANKS to the MODDY {sic but true} GREYS for the updated info)

The other red spots are the red on the Holcim cement silos and the red of the office & entrance to the courier storage shed on the other side of the road. To the lower left of the photo is where the workman repairing the road under the motorway fly over was taken.

The Three Little Tug Boats
CentrePort who run the Port of Wellington operates three Voith Schneider water tractors, KUPE, NGAHUE and TOIA. These have approximately 24 tonnes18 static bollard pull in direct
mode, with around 50 tonnes if used in indirect mode. These tugs were built directly for the
Wellington Harbourboard and two entered service sequentially around 1971, the third (NGAHUE) six years later. They were procured to satisfy a shiphandling role and a capability need for emergency assistance or rescue and salvage response to a vessel at or close to the entrance in distress. The emergency assistance rescue and salvage need was identified out of the WAHINE enquiry, following this vessel’s foundering at the harbour entrance, April, 1968. Procurement was rapid following recommendation from the enquiry judge. The harbour tugs then in service had proven unsuitable for rendering assistance to a large vessel in severe weather conditions. Wellington’s tugs are now in the order of 35 years old, but with high
maintenance attention, availability has been 100%. 80% of all ship handling involves two tugs.
The three tugs are of similar design. KUPE and TOIA have fire fighting monitors and carry sufficient foam for approximately an hour. These two have capability and accommodation facilities for coastal towage. Tugs are vital to the movement of large vessels at Wellington, given the sudden deterioration in weather conditions that can occur.

Have a great weekend
Posted by jbworks at 7:43 AM

A great photo. The little red tugs are called the Kupe; Toia and the Ngahue. The latter is out of sight behind the cruise ship.
Moody Greys

Wow! Wellington (NZ) is so beautiful. Just look at the misty blue sky. Wonderful climate. Cool year- round I believe? No such luck in Singapore where I live. It's forever hot (the word 'warm' is inappropriate) and the temperature hovers around 33C during the day and 28C at night. The only time we get a brief respite is in the month of December when temperatures become slightly acceptable between 23C to 29C.

Nice blog you have here. Keep it up!
You may wish to visit my photo blog at:
www.veryclicky.blogspot.com

Thanks and had a look at the very clicky blog ... some great photos with an eye for the unusual perspective .. the food shots brought back memories of my numerous visits ... cheers