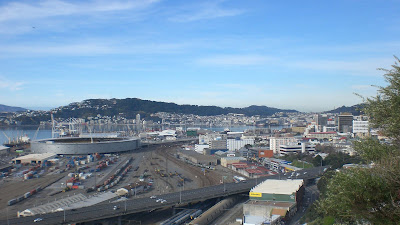 Lately the posts have had detail showing the eclectic mix of our city ... so it seems about time to ZOOM OUT and look at the "big picture".
This photo is taken from Wadestown Hill and I will point out some key landmarks ... many of which have appeared in the WDP blog.

In the forground is the Wellington Motorway ... somewhat smaller than an American or European equivalent. It is part of State Highway 1 which is the main route running the length of the country. To the lower right by the the trees (with the yellow sign) is the Wool Store which has just gained historic places recognition and is now home to designers (brand, lighting, kitchen, ceramic tiles, fashion), architects, fashion stores, exclusive homeware and a cafe. The Wool Store is on Thorndon Quay which curves around the railway yards (just beyond the motorway) and into the city.

To the left the Westpac Stadium is obvious ( and you can see why some refer to it as the cake tin!) Directly behind the Stadium you can pick out the container cranes and the wharf. Moving right you will see the green Statistics NZ building which is part of the growing 'wharf' business district. The NZ Rugby Union (All Blacks etc) is just to the left of this on the opposite side of the access road. Moving right around the harbour edge you will see a cream building with a long red roof .. that's Wellington Girls College; above with the bitsy orange roof is Revera, an IT infrastructure company and behind that again the tall building with the red dot (NZ Post logo) on the north face. This building although not architecturally notable has a key place in the city as each christmas it has an outline of a christmas tree and candles illuminated.

On the far side of the harbour on the right hand side you can pick out the beige wall of Te Papa ... our national museum. Continuing to move left the yacht marina and the Overseas Terminal (this used to be where all the passenger ships berthed); Oriental Bay and Mt Victoria (Communications mast) on the skyline directly above the Stadium.

... and please don't forget about the Westpac rescue helicopter in the top left hand quadrant. !!
Posted by jbworks at 6:55 AM