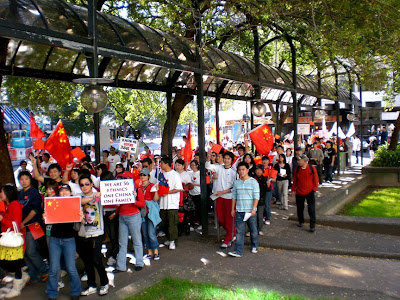 Several hundred Chinese people took to the streets of Wellington on Saturday to support their country hosting this year's Olympic Games. As the Olympic torch continues to court controversy, hundreds of Chinese living in New Zealand converged on Wellington's Civic Centre in defence of their homeland.

The group, made up mostly of students from Victoria University, says media organisations have unjustifiably made China the villain in the wake of a recent crackdown in Tibet. "They want to make money (the news media) because people want to see something bad happen in China, that's what people want to see, that's what they are making money out off but we want to change that," Jerry Dai, the rally organiser

The demonstrators say the Beijing Olympics will be a chance for the world to see the real China.

"New Zealand you are being poisoned, you don't know the truth," one protester told TV3. Protesters denied the Chinese government was behind the march. "Oh no, no, this is all student-made," one woman said. "Support China, support Chinese, support Olympics," she chanted.
Posted by jbworks at 8:49 AM

Very topical! I wonder whether this will be followed by any pro-Tibet marches?

We must have been about 200m away from each other, as I caught (and photographed) them as they came past Borders.

David .. had a look at your site ... some great images .. what camera are you using ...like your simple photoshop work especially the black, white red .. ciao, jeremy

>what camera are you using

A Canon D60 digital SLR. Getting a bit dated now. And rather large and heavy, so not a camera that would suit your documentary style. I only had it out on Saturday because I was heading down to the waterfront to take a few photos when I stumbled across the rally.

And thanks for the compliments.