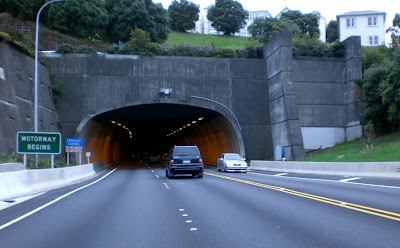 A commuters view of the city heading north.

The Terrace Tunnel takes the Wellington Urban Motorway (SH1) under The Terrace in central Wellington, New Zealand. Opened in 1978, it is 460 metres in length.

Design
The tunnel has three traffic lanes, one southbound and two northbound. The merge towards single southbound lane causes frequent congestion during peak periods rush hour. However flows at the southern end of the tunnel have improved somewhat since the opening of the Wellington Inner City Bypass.
The tunnel is one of the few single-carriageway stretches of motorway in New Zealand. All that separates opposing flows of traffic is a set of double no-overtaking lines.
The tunnel was opened as part of the extension of the Wellington Urban Motorway through Thorndon to Te Aro and was originally envisaged to include a parallel three-lane tunnel exclusively for southbound traffic (with the existing tunnel built for northbound traffic only). The motorway was intended to be extended to Mt Victoria Tunnel which would also have been duplicated.

However this proposal was shelved in the early 1970s as the rising cost of building the single tunnel ruled out duplication for the foreseeable future and the extension beyond Willis Street. The cut in funding sees the design of the motorway abruptly reduce from about the Bowen Street overbridge as six lanes are curtailed to three lanes. Appraisal of expected traffic flows also indicated that the second tunnel would not be needed for many years.
A reversible lane (tidal flow) system as used on the Auckland Harbour Bridge has been proposed. Investigation as part of the tunnel link project raised questions about safety of such an option, but it has not been ruled out.

Some of the pillars for the second tunnel approaches are visible in the Clifton Terrace carpark adjacent to the cable car line, as is some of the approach road which currently forms part of the upper deck of the Clifton Terrace carpark. These pillars may also be seen on the left hand (eastern) side of the "Wellington Terrace Motorway, looking south" webcam on the CityLink website (http://citylink.co.nz/services/webcam/terrace-south/). As you enter the tunnel it is impossible to see the other end, as it curves in the middle.

State Highway Status
When it opened in 1978, the tunnel was the southern end of State Highway 2. Alterations at the Ngauranga SH1/SH2 interchange in 1984 connected SH1 to the motorway (although SH1 continued off the Aotea Quay offramp until 1996), and in the 1996 Transit extended the SH1 status to the entire route from the end of the Wellington Urban Motorway to Wellington International Airport.