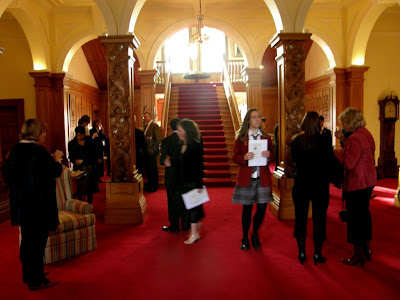 This shot was taken at the Duke of Edinburgh Award presentation at Government House ... this is at afternoon tea .. drinks and tiny cakes with the Governor-General ... all very proper yet delightfully down to earth.

Government House in Wellington is a large, two-storied house, built mostly of wood, with attics, a grand staircase, a ballroom, dozens of other large and small rooms, very long corridors and a flag tower. It is the official residence of the Governor-General, but it also contains offices, and is used frequently for receptions of many kinds.

Each year, there are usually over 15,000 visitors to the House, invited to one or more of the many functions in the House. These in-House events range from investitures and diplomatic receptions, to conferences, concerts, exhibitions and community morning teas. In addition, members of the Royal Family, Heads of State and other distinguished guests often stay at the House when they are visiting New Zealand.

WIKIPEDIA says
Government House in Newtown, Wellington, New Zealand is the principal residence of the Governor-General of New Zealand. It was designed by Claude Paton in the office of John Campbell, Government Architect. Built between 1908 and 1910, the house's grounds total 12 ha, and the house is 4200 m². There are 27 bedrooms and 19 bathrooms in total including staff quarters as well as a ballroom, various sitting rooms, state rooms, service rooms and wing offices, all of which are tended to by about 30 staff. The grounds, which have been endorsed as a 'garden of National Significance' covers some 12ha and includes a policemans lodge a the main gate. Other outdoor facilities include a Tennis court, and pavilion, swimming pool, bomb-shelter squash court, and eight external cottages.
Located at 1 Rugby Street at the southern end of the Basin Reserve, it counts amongst its neighbours a hospital (Wellington Hospital) and a high school (Wellington College). The main Rugby Street entrance has a guard house and a large flag-pole, from which the Flag of New Zealand flies when the Governor-General is in the residence[1].
The upkeep of the house is the responsibility of the Department of the Prime Minister and Cabinet. As such, supply and maintenance for the Governor-General's office falls within Prime Minister's department.
Posted by jbworks at 6:39 AM