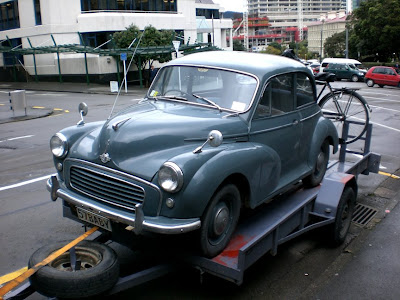 It seems to be one of those weeks for interesting transport ... here is a 1957 Morris Minor on a trailer towed behind a camper van. It was sitting outside Parliament this week ... in the background is the High Court and imediatle to the left (out of frame) is the BackBencher Pub.

Morris Minor
The original Minor MM series lasted from 1948 until 1953. It included a pair of 4-seat saloons, 2-door and 4-door, and a convertible 4-seat Tourer. The front torsion bar suspension was shared with the larger Oxford MO, as was the almost-unibody construction. Although the Minor was originally designed to accept a flat-4 engine, with four distinctive gaps in the engine bay to accommodate it, late in the development stage it was replaced by a 0.9 L (918 cc/56 in³) side-valve straight-4 producing 27.5 hp (21 kW) and 39 lbf·ft (53 N·m) of torque. This little engine pushed the Minor to just 64 mph (103 km/h) but delivered 40 miles per imperial gallon (7.1 L/100 km/33 mpg US).
Early cars had a painted section in the centre of the bumpers to cover the widening of the production car from the prototypes. This widening of four inches (102 mm) is also visible in the creases in the bonnet. Exports to the United States began in 1949 with the headlamps removed from within the grille to be mounted higher on the wings to meet safety regulations. These became standard on all Minors for 1951. When production of the first series ended, just over a quarter of a million had been sold with a surprising 30% being the convertible Tourer model.
A tourer tested by the British magazine The Motor in 1950 had a top speed of 58.7 mph (94.5 km/h) and could accelerate from 0-50 mph (80 km/h) in 29.2 seconds. A fuel consumption of 42 miles per imperial gallon (6.7 L/100 km/35 mpg US) was recorded. The test car cost £382 including taxes.
Posted by jbworks at 11:43 AM

I'm half expecting a tiny waisted woman with perfectly coiffed hair to walk in from the edge of the photo. :)

Great information with your photo. Thanks for that