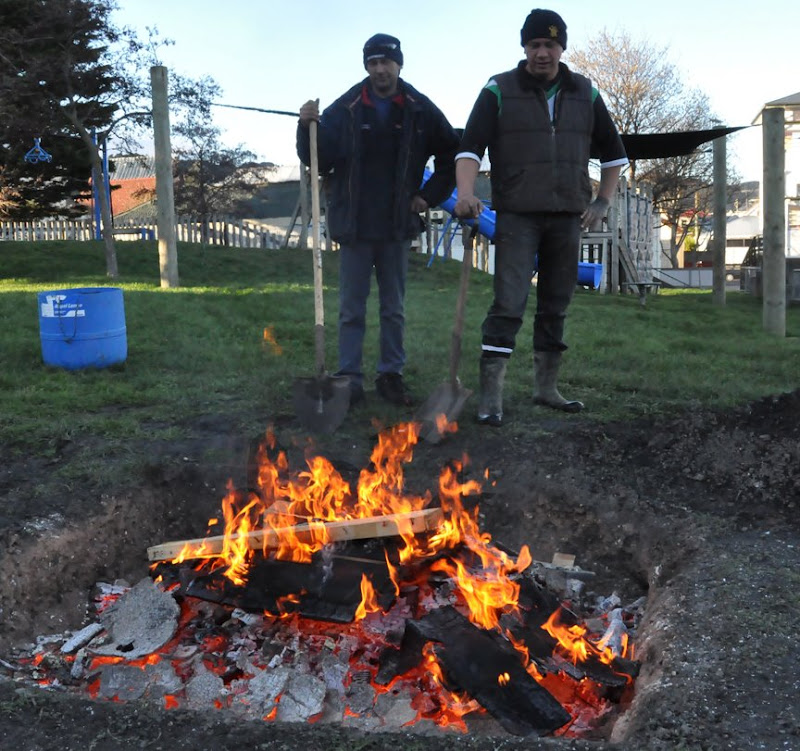 Early morning at Newtown School ... getting the oven heated up to prepare dinner. However instead of large stones these guys have used short pieces of railway iron. They had been up the night before preparing the baskets of vegetables and meat ... ready to be placed in the hangi.

Hāngi (pronounced [/hɑːŋi/]) is an ancient New Zealand Māori method of cooking food using super heated rocks buried in the ground in a pit oven. Modernised hangi methods are still used today and are often saved for special occasions due to the large amount of time and preparatory work involved.

Prior to colonization and the introduction of metals and wire, food was laid out on clean sticks, bark, large leaves and other vegetation to minimize direct contact with the super hot rocks and reduce burning. Carved bowls and flat rocks were also used for this purpose. Leaves, sticks and vegetation were used to cover the food and to prevent crushing from the weight of the earth on top.

These days, there are many different hangi methods used. Wire baskets became widely used in the early 19th century with sacking and cloth replacing leaves and bark as the covering of choice.
More recently, gas heated stainless steel "hangi machines" have attempted to replicate the style of cooking without need for a wood fire, rocks and a pit. It has become a contentious issue as to what constitutes a "real" or authentic hangi.
An examination of a traditional hot rocks open basket ground hangi reveals exactly how the food obtains the unique flavour that many Kiwis have come to love.
There are three main components to the cooking process, all of which can be affected by many variables including but not limited to earth type, amount of heat in the rocks, quantity of food and portion size, type of food and food placement.

Steaming: Water added at the start of the process creates steam instantly. Once covered, the pit oven becomes a low pressure cooker. Pressures in excess of 4 PSI have been measured.
Baking: Direct dry heat from the rocks creates an oven roasting effect. Temperatures in excess of 300°C have been measured. Smoke: Fat and juices from the meat drip onto the hot rocks and burn causing smoke which appears to be the key to hangi appearance, aroma and flavour. Often there is also ash and ember smoke that can add to the flavour and appearance.

Hangi "experts" have developed and improved methods that often, like the stones themselves have been handed down for generations. The following explains a common method.
To "lay a hāngi" or "put down a hāngi" involves digging a pit in the ground, heating stones in the pit with a large fire, placing wire baskets of food on top of the stones, and covering everything with earth for several hours before uncovering (or lifting) the hāngi. There are many variations and details that can be altered.
Posted by jbworks at 7:08 AM