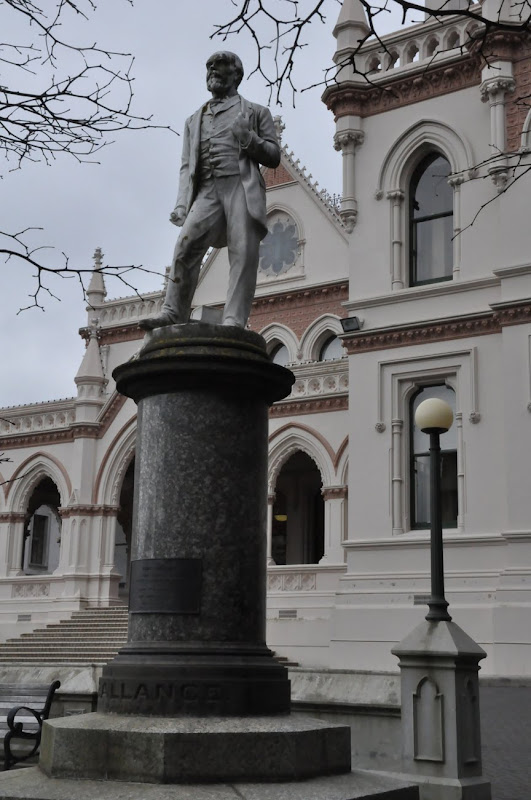 In front of Parliament, the statue of John Ballance the prime minister of New Zealand (1891–93) who unified the Liberal Party, which held power for 20 years; he also played a major role in the enactment of social welfare legislation.H e was born March 27, 1839, Glenavy, County Antrim, N.Ire. died April 27, 1893, Wellington, N.Z.

After working as an ironmonger in Birmingham, Eng., the self-educated Ballance emigrated to Wanganui, N.Z., in 1865. There he was editor of the Wanganui Herald and fought against the native Maoris. Entering Parliament in 1875, he advocated abolition of provincial governments. As colonial treasurer in 1878, he introduced a land tax to raise revenue more equitably. As minister of lands, defense, and native affairs in 1884–87, he tried to shift landownership from monopolists to small farmers and to retain crown land while preventing abuses in the sale of Maori land.

During his term as prime minister, Ballance imposed progressive land and income taxes and gained for the government the right to repurchase private land for development. He combatted the lingering depression by limiting government borrowing and won reduction of life membership in the upper house to a seven-year term, curtailing the power of his opponents. His cabinet was noted for its distinguished ministers, including William Pember Reeves, who sponsored pioneering labour-protection legislation; John McKenzie, who fought against land monopolies; and Ballance’s successor, Richard John Seddon.
Posted by jbworks at 12:21 AM