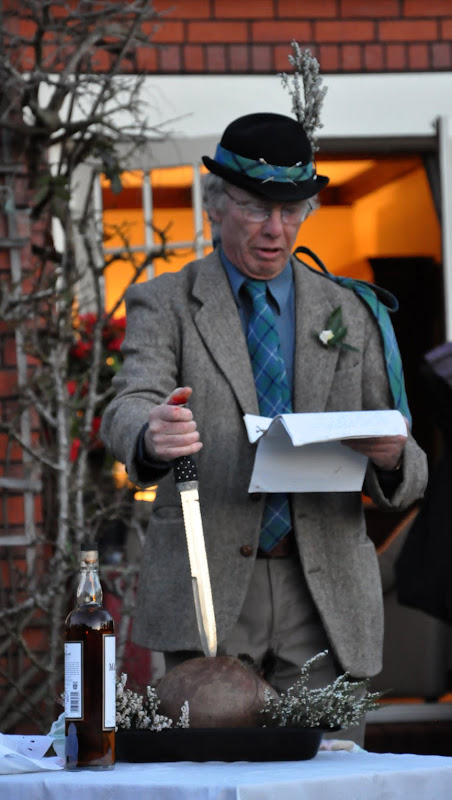 This is the last of the NOT WELLINGTON series and depicts the "haggis" ceremony at Carmo and David's wedding ... and despite what people may think ... the haggis was very tasty ... and there was none left over !!! This is the reciting of the "Address to a Haggis" before serving.

Haggis is a dish containing sheep's 'pluck' (heart, liver and lungs), minced with onion, oatmeal, suet, spices, and salt, mixed with stock, and traditionally boiled in the animal's stomach for approximately three hours.

Haggis somewhat resembles stuffed intestines (pig intestines otherwise known as chitterlings), sausages and savoury puddings of which it is among the largest types. As the 2001 English edition of the Larousse Gastronomique puts it, "Although its description is not immediately appealing, haggis has an excellent nutty texture and delicious savoury flavour".

The haggis is a traditional Scottish dish memorialised as the national dish of Scotland by Robert Burns' poem "Address to a Haggis" in 1787. Haggis is traditionally served with "neeps and tatties" (Scots: swede, yellow turnip or rutabaga and potatoes, boiled and mashed separately) and a "dram" (i.e. a glass of Scotch whisky), especially as the main course of a Burns supper. However it is also often eaten with other accompaniments, or served with a whisky-based sauce

Recitation of the poem Address to a Haggis by Robert Burns is an important part of the Burns supper.Haggis is traditionally served with the Burns supper on the week of January 25, when Scotland's national poet, Robert Burns, is commemorated. He wrote the poem Address to a Haggis, which starts "Fair fa' your honest, sonsie face, Great chieftain o' the puddin-race!" During Burns's lifetime haggis was a popular dish for the poor, as it was very cheap, being made from leftover, otherwise thrown away, parts of a sheep (the most common livestock in Scotland), yet nourishing.

Haggis is widely available in supermarkets in Scotland and other parts of the world all the year round, with cheaper brands normally packed in artificial casings, rather than stomachs, just as cheaper brands of sausages are no longer stuffed into animal intestines. Sometimes haggis is sold in tins, which can simply be microwaved or oven-baked. Some supermarket haggis is largely made from pig, rather than sheep, offal.
Posted by jbworks at 7:07 AM