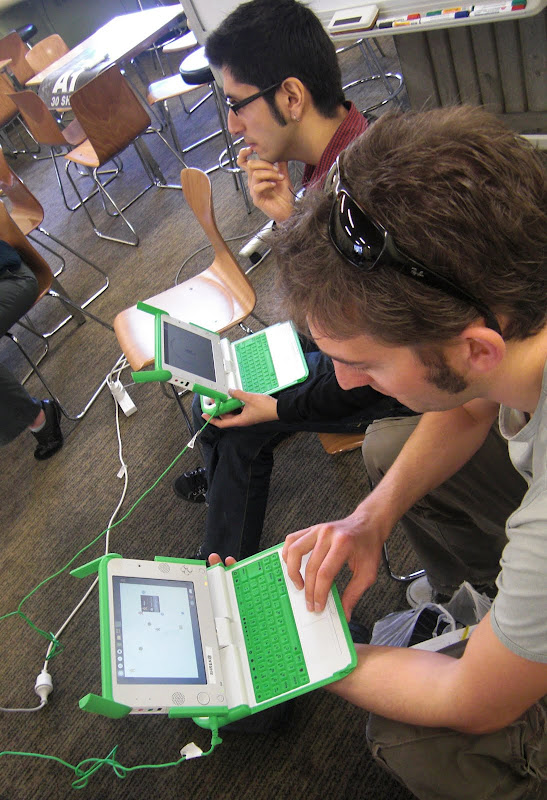 The opengovt BarCamp happened this weeked in Wellington. here are some participants learning about the OLPC initiative (one laptop per child)... amazing devices

The New Zealand Open Government Bar Camp is an "unconference" for people who are interested in making government-held data more freely available for others to re-use. An "unconference" is an alternative participant-driven event, that avoids aspects of a conventional conference, such as high fees and sponsored presentations.

Web 2.0 developments have shown the potential of combining data from different sources made freely available on the Internet. The government holds a huge range of non-personal data which could form the basis of innovative services and applications by others on the Internet.

A BarCamp is an international network of user generated conferences — open, participatory workshop-events, whose content is provided by participants. The first BarCamps focused on early-stage web applications, and related open source technologies, social protocols, and open data formats. The format has also been used for a variety of other topics, including public transit, health care, and political organizing.

History
The name "BarCamp" is a playful allusion to the event's origins, with reference to the hacker slang term, foobar: BarCamp arose as a spin-off of Foo Camp, an annual invitation-only participant driven conference hosted by open source publishing luminary Tim O'Reilly.

The first BarCamp was held in Palo Alto, California, from August 19-21, 2005, in the offices of Socialtext. It was organized in less than one week, from concept to event, with 200 attendees. Since then, BarCamps have been held in over 350 cities around the world, in North America, South America, Africa, Europe, the Middle East, Australasia and Asia. To mark the one-year anniversary of BarCamp, BarCampEarth was held in multiple locations world wide on August 25-27, 2006. The second-year anniversary of BarCamp, BarCampBlock was held in Palo Alto at the original location, but also over a three block radius on August 18-19, 2007, and was attended by over 800 people.

Following the similar lines of success, the first ever BarCamp Shimla, India was held on the June 28, 2009 as a Voice of Himachal initiativeHimVani which mainly focused on the taking up of Entrepreneurship as a profession among the various young professionals of the state.
Posted by jbworks at 10:47 PM

Those guys seem to be all cabled, wired up!

Leif ... this was an all day event so they gad the power chargers available ... people were unplugged and wandering around with the "green" machines ... different interface to what we in the so called "computing" world are used to ... but kids make these things fly !!!