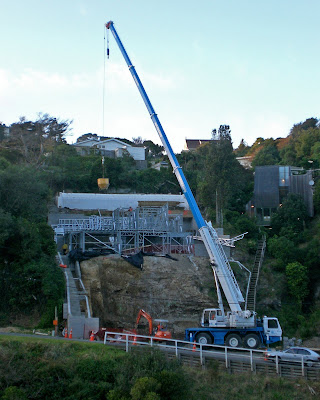 Louise posted a picture of this building site some weeks ago. This update shows the construction progress and the typical nature of a Wellington building site .. ie. a house being built on a steep hill site. You can see the challenges this offers the builders with the difficulties of getting building materials to the site ... hence the tall crane.

Unlike the majority of houses in NZ, which use timder framing, this one is constructed using galvanisd steel framing ... which is now becomimg more common.
Posted by jbworks at 9:37 AM 2 comments: 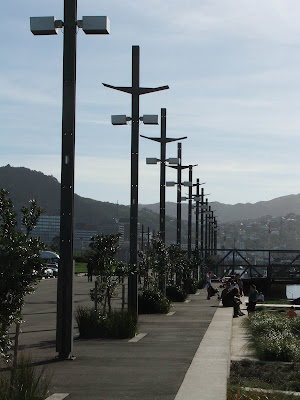 Street lamp posts on the western side of Waitangi Park looking north toward the harbour. You can see some of the office buildings of the CBD on the left hand side and houses in Thorndon & Wadestown above the people sitting in the sunshine
Posted by jbworks at 8:49 AM No comments: 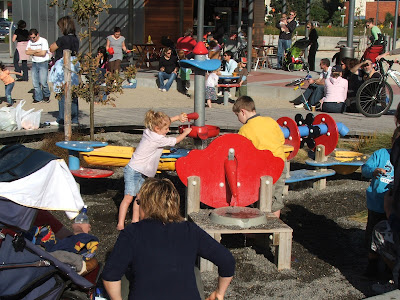 Waitangi Park which was opened last year, with the usual controversy, that seems to go with publicly funded city works, has been given an award by the Institute of Architects. The park incorporates a skateboard park, children's playground and wetlands areas. The judges praised the park as " a delightful experience for active users, passive observers and daily commuters"

From a user's perspective " the proof is in the eating" .. and by the numbers that use the park in the middle of the city ... it works !!
Posted by jbworks at 11:38 AM No comments: 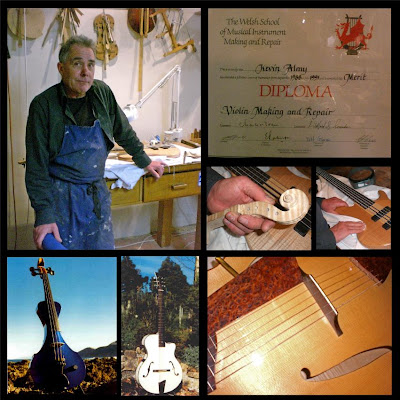 Kevin Almy was born in Plympton, a small village five miles from Plymouth, England, on the edge of Dartmoor. Working from his quiet back street studio in New Zealand's capital city, Wellington, Kevin produces a wide range of the finest quality instruments: from violins, violas and cellos to mandolins, mandolas and archtop guitars. Hidden away in a turn of the century building in Wellington's Cuba Street, famed for its cafes, curio shops and ethnic restaurants, his studio can be quite difficult to find. He is New Zealands only Master Luthier certified by the Martin Guitar Company as a guitar technician to carry out their warranty work. Kevin has also constructed flat top steel string acoustic and solid body electric guitars to order.

A growing interest in the theory and manufacture of carved top instruments, fuelled by an increasing demand for him to repair various members of the violin family, led Kevin to travel to the United Kingdom, where he was invited and privileged to attend a three year violin making and restoration course at the Welsh College of Musical Instrument Making. Following his graduation, Kevin accepted an offer to work for a highly respected French master luthier.
This was an extraordinary opportunity to work on rare and beautiful instruments, and to gain invaluable knowledge and experience in their manufacture and restoration. After three years in France, a strong desire to return to New Zealand saw Kevin Almy travel to Wellington where he established his present studio.
The archtop guitar shown in the montage above is a smaller bodied instrument specifically designed with the professional acoustic player in mind. International acoustic blues guitarist Mike Brosnan commissioned the first of these instruments. Considerable time and effort was expended developing an instrument with maximum tonal and dynamic range, as well as ease of playing and comfort. The tonal range, richness and clarity can only be described as 'awesome'.
Says Mike Brosnan"... I used to travel with three guitars to cover the range of sound I needed. This little guitar delivers them all, from Hot Slide to quiet Blues Ballads. I love it!" The top is carved from European Spruce and the back and sides from highly figured European Maple. The necks are shaped individually to specific client needs regarding neck width, profile, fret size etc. The pick up can be either an L. R. Baggs bridge transducer with the Baggs deluxe on board preamp, or a Humbucking fingerboard-end pickup.
Kevin Almy's Electric Model violin is an innovative and exiting instrument, unlike any other of its type currently available. Kevin has designed an instrument that is both state of the art in its amplified performance and futuristic in it's appearance, while using traditional luthiery techniques handed down from the time of the early Italian makers.
The tuning pegstock is either an open scroll or a modern guitar style. The neck, stop lengths, and neck elevations are identical to standard size violins, allowing the player to transition effortlessly between acoustic and electric instruments.This is without doubt the perfect instrument for today's electric violinist, combining eye-catching appearance with a rich and full-bodied sound when amplified. Apart from the Electric Model's striking lines, the range of sprayed lacquer finishes is almost limitless.
Posted by jbworks at 8:56 AM 2 comments:

The day after SATURDAY 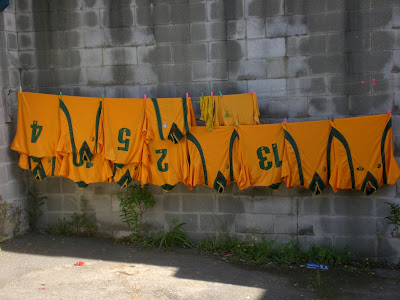 Whether you won or lost the game yesterday the team strip still needs to washed .. ready for next weekend's game
Posted by jbworks at 11:26 PM 1 comment:

On any Saturday Morning 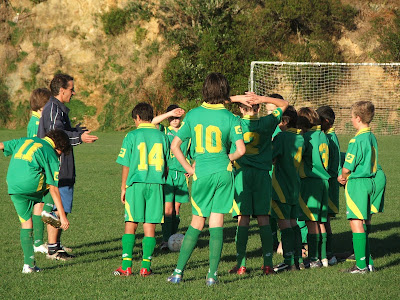 On Saturday mornings Wellington comes alive with school & college sport .. this time of the year it's mainly rugby, soccer and netball. The teams are coached, managed and supported by mums & dads. Here's a team getting their tactices from the coach before the game ... most of which is forgotten once they start the game !!!
Over the last month although we are are now in the autumn season, the weather has been very mild and warm so watching the game is very pleasant.
Posted by jbworks at 10:48 AM 2 comments: Travel diaries...
...it's hard to imagine that a city smaller than New Zealand's Auckland would be so hip and alive with excitement... Wellington has the rapidly beating heart of a creative centre..."
- Tatler, Hong Kong, 2004

.. And if you really want a "we love Wellington" T-shirt go to
T-shirts
Posted by jbworks at 8:51 AM 3 comments: 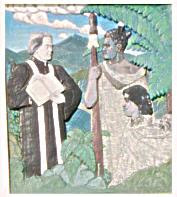 The earliest name for Wellington, from Maori legend, is Te Upoko o te Ika a Maui. In Maori it means ‘the head of Maui's fish’. Caught and pulled to the surface by Polynesian navigator Maui, the fish became the North Island.

The Polynesian explorer Kupe is credited with the initial discovery of Wellington Harbour. From Maori tradition it is estimated he arrived with his followers around the 10th century. Several places around the Wellington peninsula were named by Kupe - for example Matiu (Somes) Island and Makaro (Ward) Island. People have lived here since Kupe's discovery.

Te Whanganui-a-Tara (the great harbour of Tara) is another Maori name for Wellington. Tara was the son of Whatonga, another Polynesian migrant, who had settled in Hawke’s Bay. Whatonga sent Tara on a tour of inspection of the lower North Island in the 12th century. After a year Tara returned and reported that the best place he had seen was ‘at the very nostrils of the island’. As a result Whatonga and his followers shifted south - the first iwi (tribe) in Wellington was thus Ngai Tara. Ngai Tara eventually amalgamated with another iwi, Ngati Ira. Other iwi associated with the area were Ngati Kahungunu, Ngai Tahu, and Ngati Mamoe. Since the beginning of the 19th century iwi including Ngati Mutunga, Ngati Tama, Te Atiawa and Ngati Toa have migrated to the Wellington region.

Today the manawhenua (local guardianship) interests in Wellington city are administered by the Wellington Tenths Trust/Nga Tekau o Poneke, which comprises descendants from Taranaki iwi, of which Te Atiawa is the largest. Ngati Toa, by virtue of its boundary to the west, also has an interest within Wellington city. In addition, Maori with tribal affiliations stretching from the Far North to the Deep South live and work in Wellington and contribute to the cultural diversity of the city. Evidence of early Maori settlement and cultivation can be found at sites all around the Wellington peninsula.
Posted by jbworks at 4:28 PM No comments: 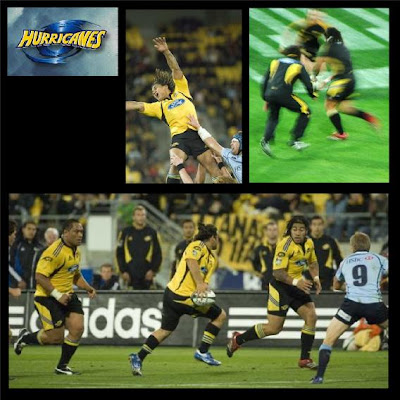 The Hurricanes Franchise is New Zealand’s largest Rugby Rebel Sport Super 14 franchise with a catchment area including 920,000 people from the central and lower North Island. The results for this Super 14 Season were not great for the Hurricanes but we love 'em anyway.
Find out more about the Hurricanes team and franchise by clicking on the link http://www.hurricanes.co.nz/index.php
Posted by jbworks at 12:08 PM 3 comments: