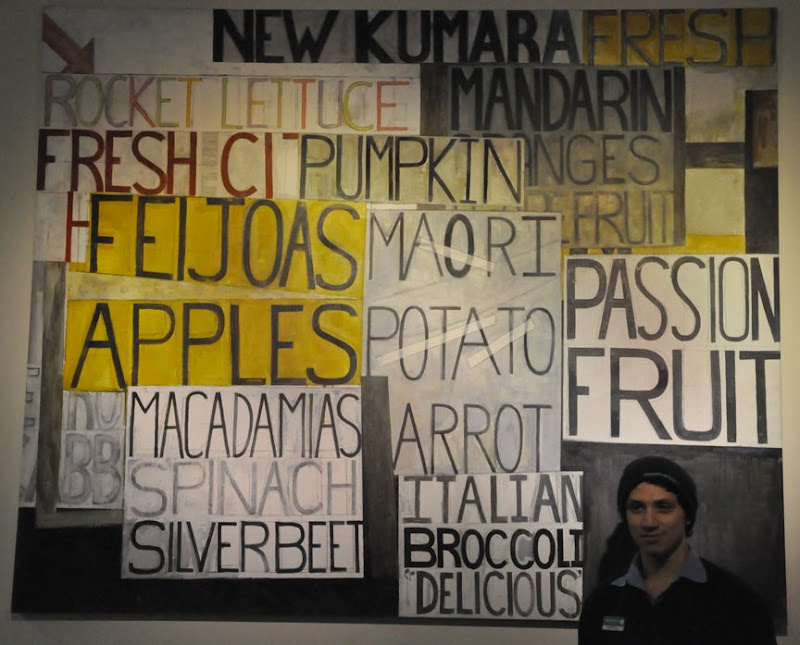 Another of Dick Frizzell's great artworks, recently hung at Moore Wilson's Fresh in Tort Street. The young guy in the bottom right hand corner is not Dick, but one of the helpful staff at Moore Wilson

Dick Frizzell (b. Richard Frizzell, 1943) is a New Zealand artist, based in Hawke's Bay.

Frizzell's work can best be described as expressionist pop (Warwick Brown) in its appropriation of kitsch kiwiana icons and incorporating them into his often cartoon-like paintings and lithographs. As such, it can be compared to the likes of Roy Lichtenstein, Paul Hartigan, ian scott. Frizzell's best-known work uses as its base the "Four Square man", an advertising character for the Four Square grocery chain.

Frizzell is also responsible for the lithograph 'Mickey to Tiki'. This has now become the best selling print in New Zealand. It portrays a cartoon 'Mickey Mouse' changing in stages to a 'Tiki'

Frizzell trained at the University of Canterbury School of Fine Arts from 1960 to 1964, studying under such well-known artists as Rudi Gopas and Russell Clark. After this he worked in advertising for many years, and it is through this that he gained his appreciation for the advertising characters he uses in his work.
Posted by jbworks at 7:49 AM

Have you posted the wrong photo, J? Because I don't see any young guy in the bottom right hand corner.

That's odd. Yesterday the photo was the width of every other photo you have here, and the RHS wasn't visible. Today the photo has expanded and the bloke is visible.

Is it my browser, or have you tweaked some HTML?