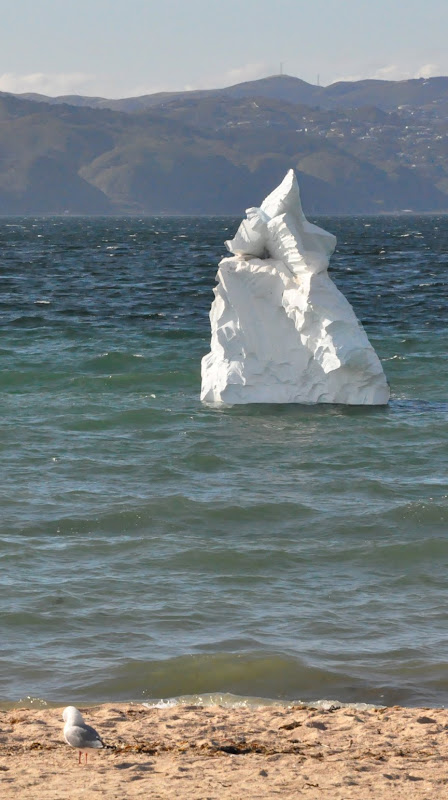 A fake 'iceberg' in Wellington's Oriental Bay yesterday was made by special effects wizards Weta for a climate change stunt. The object, which appears to be made of polystyrene or a similar material, is between the Carter Fountain and the Overseas Passenger Terminal. A plaque visible on the 'iceberg' reads: "Press anonymous 2009".

A group of self-described anonymous artists claimed responsibility for the 'iceberg' via email. "We are not affiliated with any formal group."We're just people who care, people who have children. This is an appeal to every New Zealander who sees this artwork to stand up and take action. It's time to really do something about climate change, before it's too late."

Weta spokeswoman Ri Streeter said Weta Workshop was commissioned to make the iceberg by the artists, who asked to remain anonymous. "When the artists approached us they told us it was a statement for global warming." The group wanted to create conversation and awareness around the issue and Weta thought it was an interesting thing to do, she said. It was installed by a team of professionals and overseen by Weta. It was not a hazard and was clear of the shipping lane, Ms Street said. The object became a talking point on Oriental Parade, with observers variously speculating that it could be an artwork, a movie prop, advertising, or a climate change awareness stunt.

Last month, the Hutt motorway traffic was brought to a crawl one morning rush-hour as motorists slowed to spy at what appeared to be a school of sharks swimming in the harbour. But the fins were fakes being used to promote a fish market at Lowry Bay in Eastbourne.
Posted by jbworks at 8:56 AM

I remember a couple of years ago there were icebergs off the otago and canterbury coasts. You could go on a helicopter tour and even land at one point. That would be an experience but probably not good for the atmosphere.

It caught my attention for sure!

It's a beautiful destination; I love to know more about this lovely destination.......

Cash Online Get Easy cash at your door step

Very nice blog, and the topics picked always surprised me. I think we can't ignore this point, about he icebergs, and the climate change... it's obvious: we need a better politic, and the congress will be warm in a couple of years.