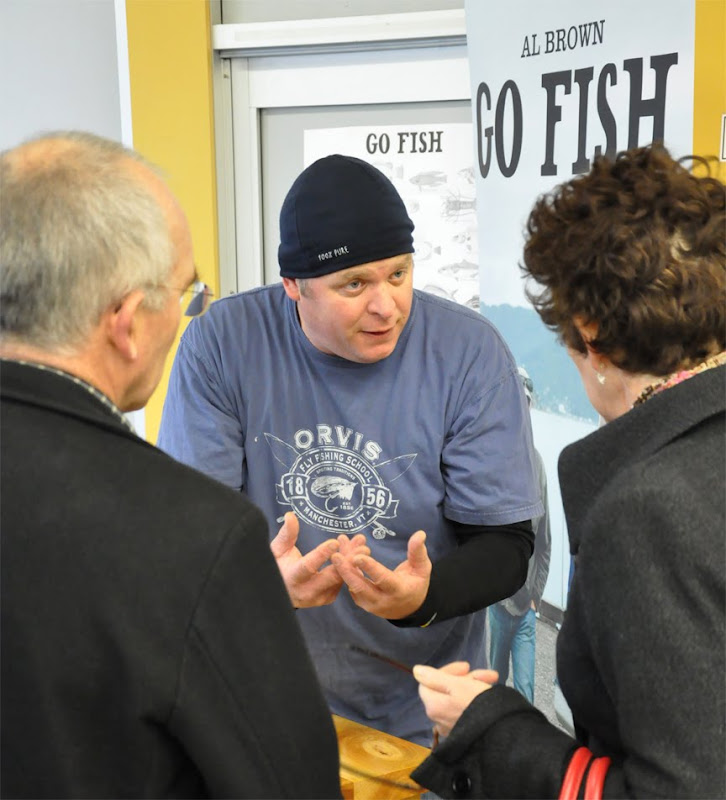 "DON'T LET THIS GUY SCARE YOU"
Al Brown was at Moore Wilson's Freash his morning .. doing one of those things he does best ... talking with real people about his passion for fresh New Zealand food ... and how to make the most of it. He has just published a book "Go Fish" .. a superb publication on catching, cooking and eating kaimoana ... food from the sea. The book is a work of art in its self ... the cover can be taken off, unfolded to form a large poster of NZ fish species. The hard cover is beautifully embossed with the image of a fish ... so this publication is highly recommended. The cover photo is pure Al Brown ... in his element. Chef, TV presenter, writer and Wellington restaurant-owner - is one of the best known faces of New Zealand cuisine

Al Brown and Steve Logan of Logan Browns on the cnr of Vivian & Cuba Sts create culinary delights that are natural, with stunning flavours ... so when in Wellington make sure you get along to this restaurant which received New Zealand’s highest restaurant honour - Cuisine Restaurant of the Year - in 2009.

Hunger for the Wild
Away from Wellington, Brown and Logan are best known as co-presenters of the award-winning television food series, Hunger for the Wild, which has them visiting regional New Zealand, introducing great Kiwi characters, chasing down some of New Zealand’s finest food, and preparing dishes of wild game and seasonal delicacies.

Brown grew up in the Wairarapa region, in the southern half of the North Island, on a sheep and cattle property. His passion for the outdoors, especially hunting and fishing, developed early in life when he went on regular hunting holidays with his family to the coast. After completing a culinary arts degree at the New England Culinary Institute, USA, then cooking in restaurants in North America, Europe and New Zealand, Brown returned to New Zealand and opened Logan Brown Restaurant.
Posted by jbworks at 8:17 PM