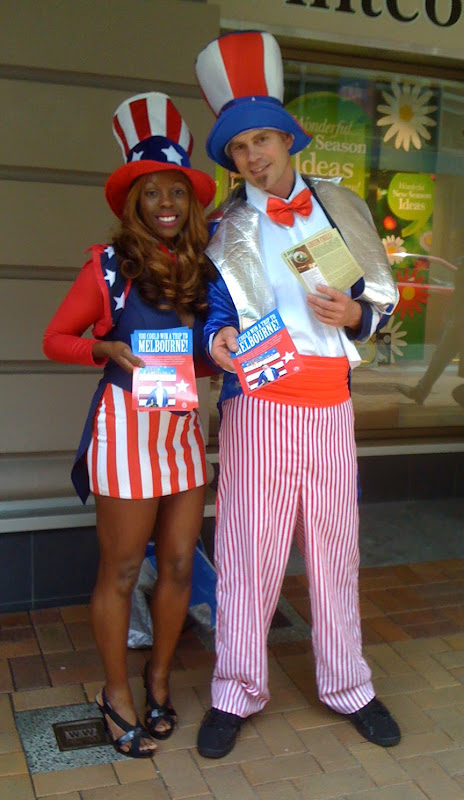 Working the crowds on Lambton Quay ... promoting Jamie Oliver's new cook book "AMERICA" ... these guys were delightful ... the choice of the young dark skinned lady was inspired although she was not from the USA but her parentage had links to Africa and the Carribean ... I think that was right and the guy looked like old Mr America himself ... they were so friendly and keen to chat I forgot to ask their names ... it added some colour to the Quay on what was a mixed day weatherwise.

And now thanks to one of the faithfull followers of WDP ... Leif Hagan who added this.

Mr America = Uncle Sam ... who is the national personification of the United States and sometimes more specifically of the American government, with the first usage of the term dating from the War of 1812 and the first illustration dating from 1852. He is depicted as a serious elderly white man with white hair and a goatee beard, and dressed in clothing that recalls the design elements of flag of the United States—for example, typically a top hat with red and white stripes and white stars on a blue band, and red and white striped trousers
Posted by jbworks at 12:14 PM

You sure are right .. and his history is interesting too... ciao JB