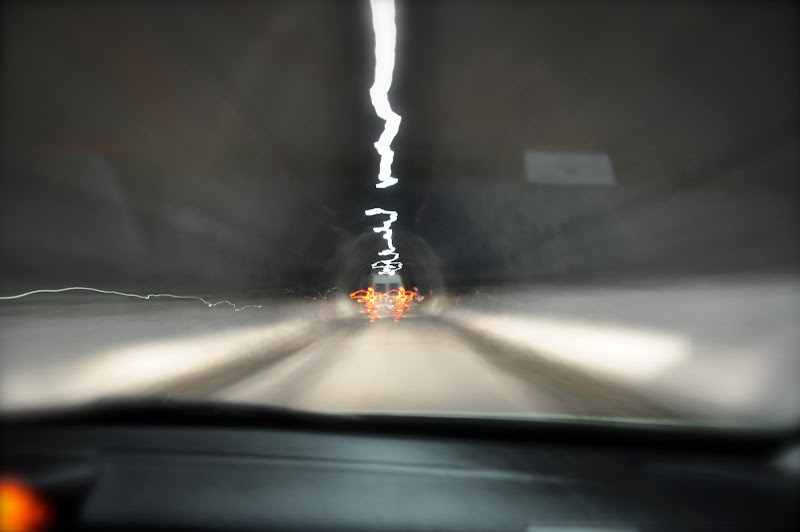 Going through the Homer Tunnel on the road to Milford Sound.

The Homer Tunnel is a road tunnel in the Fiordland region of the South Island of New Zealand, opened in 1954. It links Milford Sound to Te Anau and Queenstown, by piercing the Main Divide at the Homer Saddle. It connects between the valley of the Eglinton and Hollyford Rivers to the east and that of the Cleddau to the west.

The tunnel is straight, and was originally single-lane and gravel-surfaced. The tunnel walls remain unlined granite. The east portal end is at 945 m elevation; the tunnel runs 1270 m at approximately a 1:10 gradient down to the western portal. Until it was sealed and enlarged it was the longest gravel-surfaced tunnel in the world

William H. Homer and George Barber discovered the Homer Saddle on January 27, 1889. Homer suggested that a tunnel through the saddle would provide access to the Milford area.

Government workers began the tunnel in 1935 after lobbying by J. Cockburn of the Southland Progress League. The tunnel and the associated Milford Road were built by relief workers during the Depression, initially just starting with five men using picks and wheelbarrows. The men had to live in tents in a mountainous area where there might be no direct sunlight for half of the year. At least three were killed by avalanches over the coming decades.

Progress was slow, with difficult conditions including fractures in the rock bringing snow flows into the tunnel. Compressors and a powerhouse in the nearby river were eventually built to pump out 40,000 litres of water per hour. Work was also interrupted by World War II (though the actual piercing of the mountain had successfully been achieved in 1940), and an avalanche in 1945 which destroyed the eastern tunnel portal. These problems delayed the tunnel's completion and opening until 1954.

A great historical photo of the tunnel entrance
Posted by jbworks at 6:43 PM

What an awesome tunnel it is. I'm glad I wasn't doing the driving when we went through it in 2001.