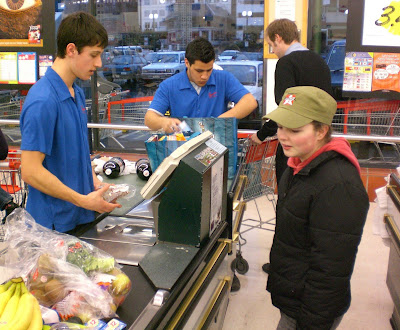 These places have to be some of the consistently busiest places in Wellington .. the supermarkets.

Within the central business district of Wellington we have four New World Supermarkets .. one down by Waitangi Park, the New World Metro in the centre of the city, New World Thorndon and the Railway Station Metro store. Wellington also has a number of fruit and vegetable markets on the weekend which are always well patronised.

This image is at the Thorndon supermarket which is on the northern side of the Wellington CBD .. about 500 metres north of the Beehive and Parliament .. YES I suppose our politicians have to eat as well. That's my daughter Anna in the photo .. hoodie, puffer jacket and Cuba Street Festival cap. I recall when we were in New York, Christmas 2006 .. going to Columbus Circle and shopping in the Wholefoods supermarket downstairs ... no matter which city your in you've gotta eat !!
Posted by jbworks at 8:54 AM