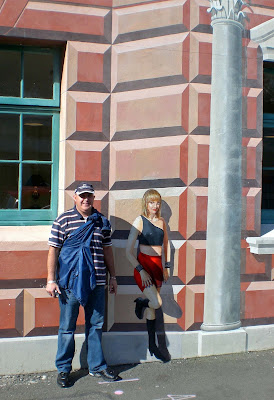 OK this is early for Thursday as I have access to technology today
Well this piece of urban wall art is relatively famous aound here .. it is a play on the red light street "Vivian St" and is on the corner of Marion and Ghuznee Sts. Marion Street runs through to Vivian St at the southern end. To give it some perspective I accosted this helpful guy who happened to be passing by ... he seemed to find it quite amusing and it is better than putting a crate of beer on the ground to give you an idea of the scale. The actual building is concrete and the large bricks and column are also painted on. Click on the image to view the larger version of the photo.

There have been moves to Reignite Old Red Light District. The Wellington sex industry leader Michael Chow wants to re-establish Vivian Street as the city's premier adult entertainment strip. Vivian St was the hub of the city's red light district from the sixties to the early nineties and boasted Wellington's premier strip joints, peep shows and illegal brothels.
The street was also the home of the famous coffee bar operated by the flamboyant transsexual Carmen.

Following Carmen's decision to leave and live in Australia, along with redevelopment, the street's fortunes began to wane. Over the years the pioneering sex clubs began to slowly close down. Fire destroyed others and now all that remains is the run-down Liks joint, once part of a stable of clubs operated by the self-styled sex king, Brian Le Gros is all that remains.
Any hope of Vivian St being redeveloped as a sex industry centre were also dashed several years ago when newcomer Michael Chow established the Mermaid Bar and Splash Club in Courtenay Place. The Wellington City Council was caught off guard by Mr Chow's successful planning applications and swiftly moved to change the by laws, stopping any further sex industry operation in Courtenay Place.
Crying foul, an angry Le Gros, who was also a successful property developer, quit Wellington, vowing never to return to the Capital City. With the passing of the Prostitution Law Reform Bill, Mr Chow believed the time was ripe to once again re-establish Vivian Streets the city's prominent red light district. His is about to open the street's first-ever legally operated brothel, Il Bordello and has plans for further outlets. Mr Chow describes his latest venture as an "up market gentleman's club."

He says the Act legalising prostitution has opened the way for the development of "high class" operations like Il Bordello. Uptil now the sex industry has operated in an uncertain dodgy environment with no quality of service standards. "Il Bordello is a state of the art operation, professionally run and I believe, will see the rebirth of Vivian St as the leading centre in the provision of quality sex industry operations in Wellington," Mr Chow said.
Posted by jbworks at 11:15 AM

That's a real classic for the "trompe-l'œil" folks

Very nice, I never seen before trompe l'oeil with people included like this. Good shot.

The bloke looks much too happy!