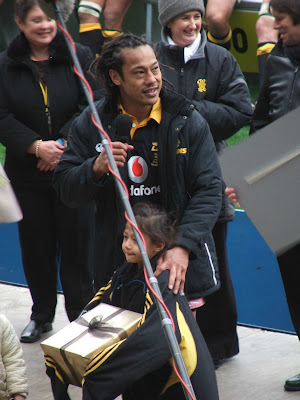 We were there on a cold wet night .. and it was great !!! Apologies for the television microphone on the boom .. but there was a media scrum for this event.
Rugby legend Tana Umaga closed the chapter on his New Zealand rugby days by bringing his children on to the field and making a stand against child abuse. In an emotional end to his New Zealand career, Umaga's daughters joined him on the field after his 100th game for Wellington yesterday - his last before he leaves for France. Umaga, famously protective of his family's privacy, told the crowd it was possible to play tough rugby then go home and be a loving father.

Umaga was the last to come out for the start of the match which saw him play his last game for Wellington in front of an excited crowd of 20,000. His home team beat Manawatu 37-3, a fitting end to his 14-year career. There was a standing ovation for the former All Black captain, and a farewell from the hometown crowd and the Wellington mayor. He has been honoured with the renaming of an access way: aisle 13 is now Tana Umaga Aisle, identified with his Number 13 Wellington team jersey hanging at its entrance. Umaga delayed his departure to France, where he will coach Toulon, to take his tally from 96 to 100 games.
The Wellington-born rugby player with the trademark dreadlocks retired from international rugby at the end of 2005 with 74 test caps. He began playing for the Wellington Lions in 1994, and was selected for the Hurricanes in 1996. He took over the captaincy of the Wellington team in 2003. Graham Henry named him as All Blacks captain in 2004 and he led the national team to win 19 of their 21 games. He became the first Pacific Island player to captain the All Blacks in a test match.

A special thanks to stuff.co.nz for these words
Posted by jbworks at 7:35 AM