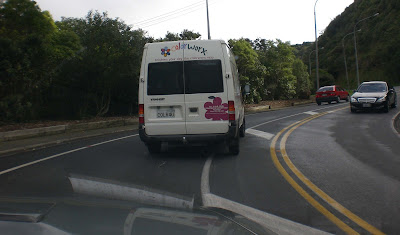 As I understand it, this could have been the theme for the first day of August as it was one of the suggestions. You see with being one of the first places in the world to see the new day I find out about the theme the day the day after the first day .. if you get my drift. Anyway waste not- want not ... so here was the back up daily "theme" photo blog

This is the paint company's van I followed up Ngaio Gorge yesterday .. it had the personalised number plate [COLR4U] ... and as a bonus we have two photos today ... as I couldn't get my number plate and this one in the same photo ... as it was on the car I was driving .. a tad awkward !!!

This image is the number plate on my car .. a 1984 Rover SDI 3500SE .. a sort of classic British car of the 80's. The British Police used to use them .. painted white with a blue red blue stripe along the side .. hence they became known as "The Jam Sandwich"
As you have now realised ... in New Zealand we can purchase personalised number plates for our vehicles and there are some very interesting ones. Like the [VOL123] series purchased by the local Volvo dealers for all the cars they sell, they just change the numbers for each car they sell and obviously no more than 999!!; [COLON] which is on a surgeons car, [CME2P] on a urologist's car, [SEWNSO] which is on a blue Mercedes coupe I see every morning, [DECOR8] on a house painters van but perhaps one of the most clever in the NZ context is [FLAH] ... and yes you might well ask. This plate is owned by a rugby fanatic in the South Island whose favourite position in a rugby team is the "half back" .. that's the player behind the forwards scrum ... so do you get it now ?
Posted by jbworks at 12:03 AM

My school principal has 'IEDUC8'

You should get a "wellington DP" plate!

I wonder how to spell wellington in short. hmmm