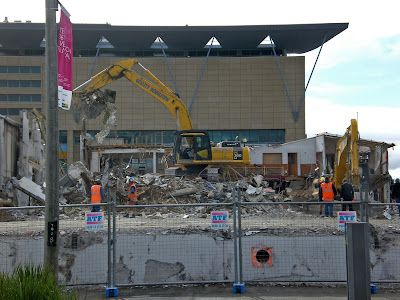 The face of city keeps changing ... a few days ago this was the site of The Warehouse .. a big building that was the home of the unbiquitous " red shed". The building behind is Te Papa .. our national museum.

An now for some history ... Since 1982, The Warehouse Group has grown from one small store on Auckland's North Shore to a retailer with over 128 stores throughout New Zealand. There are about half a dozen in the Wellington area alone.
The company strapline, "Where Everyone gets a Bargain", was the brainchild of founder Stephen Tindall. Stephen saw an opportunity for innovative price driven retailing. His timing was perfect, as New Zealand’s buoyant marketplace was overdue for new and exciting products at competitive prices. This, combined with an era when import restrictions were removed, created an ideal environment for growth and success in the retail area and so The Warehouse Group was formed.

During the early years, The Warehouse invested capital in computer and software packages, which enabled the company to instantly identify fast or slow moving products. This lead to an extraordinary influx of new and exciting products never before seen in New Zealand and at the most competitive prices.
From 1982… An advertisement in Auckland’s evening newspaper - the now defunct Auckland Star - on Thursday 18 November 1982 was the first public announcement about the opening of the first Warehouse store. ‘BUY DIRECT FROM THE WAREHOUSE’ screamed the headline, followed by the announcement: ‘Now you can buy manchester, furniture, matting, toys and hardware, etc at massively reduced prices - direct from the WAREHOUSE!’ And across one corner, the historic words: ‘OPENS SATURDAY!’. Due to customer pressure, however, the doors had to be opened a day early, on the Friday, and the company’s first cash book shows sales that day of $1,978.38. On Saturday 20 November, 1982 - the official opening day - sales worth $4,490.87 were recorded. By the end of the company’s first full week of trading, sales had reached $30,132.99 including sales made on the non-official Friday. Total sales for the first four weeks of its existence to a handsome $101,308.57.

Now race forward twenty years, to Thursday 9 May 2002,and the opening of the company’s new $10 million Warehouse store in South Dunedin. Consider this typical new-format store and how it exemplifies twenty years of change. It has a floor area of more than 8,850 square metres compared with the first store’s 550 square metres. Instead of displaying its goods on plywood sheets supported by trestles - the standard fittings in 1982 - the South Dunedin store is fitted with twenty kilometres of hungry shelves which take up to six truck-and-trailer units a day to keep filled. In comparison, the South Dunedin store’s equivalent figures, twenty years later, were $427,485 for the first day and more than $1.4 million for the first week.
Posted by jbworks at 11:10 AM

So - where has the Central Wellington warehouse gone to? Is there no long a red shed downtown?