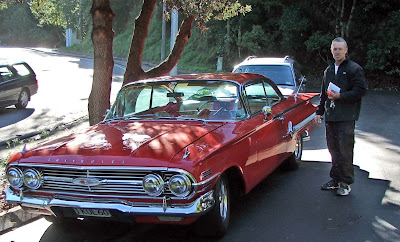 I was driving down Ngaio Gorge road to work and what do I see but a bright red fine example of Automotive Americana ....This Impala two door hardtop shows the new more crisply styled full size 1960 Chevy body. The parking lights moved down below the bumper and the fins became flatter .. and the proud owner is Andrew .. also on the way to work. A unique and delightful touch is the red dice (white spots) caps on the tire valves !! ... and note that this still has the original left hand drive. In New Zealand all but a very few imported vehicles are right hand drive as we drive on the left downunder .. just like Australia and the UK in the Northern Hemisphere.

I recall as a school boy watching a local farmer (only 5 foot 4), Norm Kingston driving his baby blue Impala ... I was amazed that such a small man had such a loooooooooooooong car.

...and now some automotive history

The 1950's Impala was big, very big. Chevrolet decided to create the Impala as its own model. Its styling has been termed 'bat-winged' due to the rear-styling of the vehicle. A variety of engines were available ranging from an inline-6 cylinder up to a triple carburetor, 348 cubic-inches V8 capable of producing 315 horsepower. A fuel injected V8 became available in 1959.
From the front of the car, the design was fairly normal for the 1950's era. Extensive amounts of chrome littered the front end. Two headlights, located side-by-side, were placed on each sides of the vehicle. A front grill was used to help keep the engine cool. View the car from the side and it becomes immediately clear that this is a big vehicle. The length of the vehicle could be extended an additional 11 inches (275mm) by adding the Continental spare tire cover to the rear of the car. Viewing the car from the rear, the car quickly ends up in a league of its own, with only a few other vehicles such as the Cadillac Series 62 / DeVille having such a radical rear-end. The vehicle featured rear-fins that resembled cats-eyes. To top it all off, this car was not-only long, it was also very wide.

Chevrolet's aim of creating a vehicle known as a "prestige car within the reach of an average American citizen" proved to be a success when a large crowd of enthusiasts welcomed its production. This positive response encouraged Chevrolet to utilize the best possible materials for the Impala.1960 Chevrolet Impala bears a wide painted spear in its rear quarter. A notable appearance is the short trim that runs from the headlights with two pieces of trim above and below it.

Drum brakes were used and due to the weight of the vehicle, tended to wear out rather quickly. The Impala came in three different body styles including a four-door sedan, two-door coupe, and a convertible coupe. Even though the vehicle weighed 3650 lbs, it could achieve a zero-to-sixy run in about 9 seconds. Top speed was in the neighborhood of 130 miles-per-hour.
Considered to be ‘the best selling full-size car in the U.S.,' in 1960 the Chevy Impala was designed and built by the Chevrolet division of General Motors.

The name Impala originated from a southern African antelope known for its speed and prowess. Introduced in 1958, the Impala was developed by chief engineer automotive executive for General Motors, Edward Cole. Michigan born, Cole was the son of a dairy farmer whose lifelong aspiration was to become an automotive engineer. Beginning as a lab assistant for the General Motors Institute, Cole worked in engineering before gaining recognition and becoming promoted to chief engineer in 1952. Cole eventually became president of Chevrolet in 1967.
Introduced with a trim package, the new sporty model was unique with its six taillights. Eventually becoming the ‘best selling car in the Chevrolet product line', in 1959 it became a separate model in both two and four-door versions. Within the second year of production, production reached 473,000 units. Continuing for a decade as the best-selling automobile in the U.S. Impala broke the record for sales with over 13 million units sold. The Impala held this record until 1977 setting an ‘all-time industry annual sales record of more than 1 million units.'
Posted by jbworks at 8:15 AM