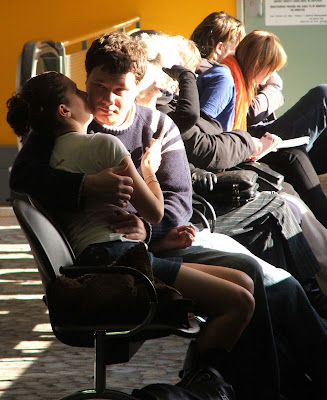 .. and for many there is also that nail biting side to Wellington Airport .. just have alook at exciting landings to see what I mean. The airport has an interesting history
The current site opened in 1959, after lobbying by the local Chamber of Commerce for a location that was much closer to the city centre. Wellington's main airport was previously to the north at Paraparaumu Airport on the Kapiti Coast, which was deemed unsuitable for large planes due to adverse terrain. The original length of the runway was 1630 m (5350 ft) and was extended to its current length of 1936 in the early 1970s, to handle DC-8s.
Wellington Airport's original domestic terminal was built as a temporary measure inside a corrugated iron hangar, originally used to assemble de Havilland aircraft, and was not replaced for many decades. It was known for being overcrowded, leaky and draughty. An upgrade of the domestic terminal, budgeted at NZ$10 million, was announced in 1983 the plans were shelved after cost projections more than doubled. The terminal was extensively refurbished in 1986 by Air New Zealand, and Ansett New Zealand built a new terminal as an extension to the international terminal when it commenced competing domestic air services in 1986.
In 1991, the airport released plans to widen the taxiway to CAA specifications and acquire extra space, which were abandoned after protests from local residents. The plan involved the removal of the nearby Miramar Golf Course and a large number of residential and commercial properties. The Airport purchased land from the Miramar Golf Course in 1994 for car park space.
A major new terminal was completed in 1999 and integrated with the international terminal, which had been built as an abortive first stage of a whole new terminal in 1979, and construction is under way to create a 90 metre safety zone at the south end of the runway in order to comply with safety regulations. A similar zone will be constructed at the runway's north end. Since the airport has been two-thirds privately owned by with the remaining third owned by the Wellington City Council.

In late 2003 the airport installed a large statue of Gollum on the terminal in order to promote the world premiere of The Lord of the Rings: The Return of the King ... this has since been removed ... however the new branding "Wild at Heart" is absolutely positvely Wellington.
Posted by jbworks at 11:09 AM

About difficult landings, see this: http://www.youtube.com/watch?v=Y7Ad4y9hPE4