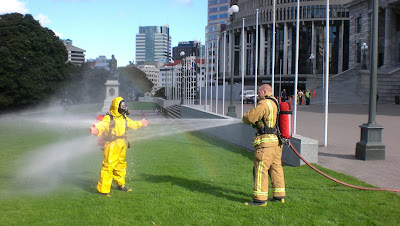 Well this was one of those moments when you manage to be in the right place at the right time. I was up the Parliament end of the city in the afternoon and thought some photos of Parliament and The Beehive from some different angles maybe good for the WDP blog. I walk up the path to Parliament and there are two fire engines, fireman, security guards, serious looking officials .. and the main steps to the Parliament Building all roped off with what looked like a yello suited, gas masked goon sweeping the steps. Hmmmmmmmmmmmmmmmm !

It turns out that someone spilt some suspicious chemicals on the steps and this was the cleanup underway. They finished that and then they had to put the yellow suited fireman through a special de-contamination wash process ... YEAH RIGHT! .. basically a hose down by his mates on the front lawn of New Zealand's Parliament House. more photos

In the photo behind the fireman with the hose you can see the offending steps. with the columed facade of the lower level of the Beehivebehind them. Above the zuit suited fireman you will pickout the statue of Richard John Seddon ... "King Dick" was our longest serving Prime Minister. The tall building in the centre background is the one on Midland Park, Lambton Quay
Posted by jbworks at 12:21 AM

Something seems a little out of kilter here. Just in case he has been contaminated with dangerous chemical on the steps. Let's hose him down and keep all those nasty chemicals on the grass?

it's good to have your camera on hand, or you would have missed this gem.

Steve .. I agree with you ... in fact I mean't to go back today and see if the grass was dying !!! .. it is ironical that they use all this protective clothing and wash everything on the grass .. ( I don't think there was anything really toxic .. more an opportunity for the firemen to have a bit of a play with their fancy suits !!.. thanks for the comment

This is the kind of photo you cannot plan for - only be there camera in hand when it happens.